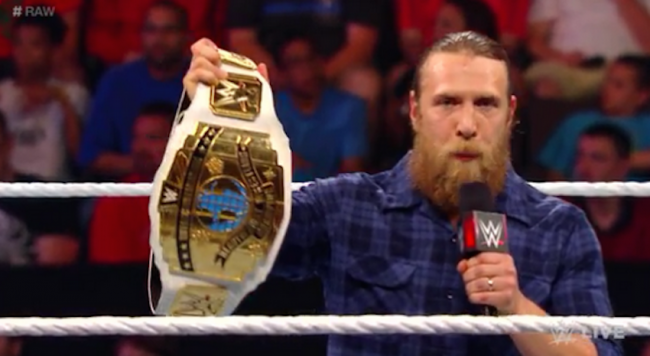 For a while now the Yes Movement in WWE has been alive and well. The fans of Daniel Bryan continuously chanting Yes! Yes! Yes! has helped this major underdog surpass any obstacle put in his way. From the Authority to a shoulder injury that kept him out of the spotlight for months, Daniel Bryan has been able to bounce back from anything and rise to heights many would never say he could make it to.

In some ways it seems like almost yesterday when Daniel Bryan went against Triple H and won, just to be put into a Triple Threat with Orton and Batista later that night for the Heavyweight Title, and won that as well. Daniel was able to hold onto the title for a little bit but injury forced him to eventually give up the title after what truly was only a short title reign.

So Daniel Bryan has come back much to the fans delight. The Yes Movement was alive and well it seemed and the crowd stood behind him as much as it ever did. So what does Daniel do? He rides the high of the crowd and swiftly gets back into the groove of things and within only a few months, Daniel goes from having no title to having the Intercontinental Title! However, the story doesn’t stop there!

About a few weeks before the writing of this blog, Daniel Bryan was pulled from the European Tour the WWE was having because of an injury to his shoulder. He has not been seen since until last night on RAW. Last night on RAW, Daniel Bryan has once again vacated a title. His health isn’t what it needs to be to wrestle and the Doctors don’t know when or even if he will be able to come back. With his wrestling career very much in question, it is hard to know what the future will hold for Daniel Bryan and if his appearance on RAW the other night was the last time he will step foot in a WWE ring.

The fans were behind him as he surrendered the title and admitted he does not know if he will  ever make it back into the ring, but how long will fans stand behind him when he is not around? My question to you is if Daniel Bryan can come back to in-ring competition can he ever get back to the level he had before? Will the fans still be behind him? Can the Yes Movement survive this latest blow or will this be the final nail in the coffin?

2 thoughts on “Is Daniel Bryan Finished?”

ATG Chainmail: Half Persian 3 in 1