A while back I came out on this site as Pansexual and I had a very cringe-worthy take on how to describe things now that I look back on it but that’s when I was still trying to figure a lot of things out and had not done a lot of research into the whole LGBT thing and what all was out there. The thing is it was a very freeing thing and while I’m sure I may have lost some followers due to it the thing is I never really started this site to gain a ton of followers or anything I started it to be able to be me and share my love of the Geek culture.

Now with this site I have been open with a lot of things. Especially when it comes to my health both with Cancer and my Mental health and that I suffer from depression. But there is one huge thing I have not been very open about and I have not been truthful about but I am about to lay it all out here and now. For the most part this website is run and the blogs made by one person. Kevin Coryell created this site but over the years we have had other writers. Ben Cass who is no longer with the site used to be my best friend. Sarah Jo Coryell is my wonderful wife. Kaycia Gayle is anyone’s guess but most likely several people as I had found a group that will make content for your site for free a long time ago and well that’s the name I made for them to post under. This brings us to our 2 other biggest contributors over the years Amanda Gayle and Kathryn Asano. Both of those names have been me. Amanda started out years ago as a Pen name with my RPing on AOL. This is because way back in 96 I was RPing and decided to make a female character and when I told someone who I thought I was my friend that the character was run by me he cut all ties to me and my characters and said he never wanted to have anything to do with me ever again. So for years if anyone I didn’t know extremely well asked who ran my female characters in my RP groups it went to Amanda Gayle and I decided when I started writing things that she would be a Pen Name for me.

So as the years wore on I started figuring more and more about myself out. Eventually back in 2016 a year after I was diagnosed with cancer I started a small blog on wordpress called Kittens Rant, a couple of the blogs were reprinted here actually. With that blog was the realization that I am at least GenderFluid and I had a very strong feminine side to me and so Kathryn was born. I felt that name suited me. Skip forward about a year and I realized that I was actually Trans…it’s a whole long and involved story and maybe one day I’ll post it on the site.

The big takeaway is that while I do not present as a woman I am a transgender woman. I may never get the opportunity to transition as I would like due to finances and health concerns. But I plan on living my true life out here on this, my website. I plan on living my true self in my posts and the games I play. So from now on all posts will be coming from Kathryn…no more hiding myself away. So this is my coming out to the wider world.

Hi my name’s Kathryn Felicity Coryell and I am the founder of DraxisWeb Productions and DraxisWebb Gaming. You can find our gaming stuff on Facebook where we live stream and I hope you guys will stick with me as I start my site up once more and get the reviews and crafts and stuff up and running again! Always remember this site will now and forever be a safe place for all people no matter who you are, no matter what you look like, no matter who you love or how you identify and no matter your religion. We love you all and hope you’ll continue on this journey with us. 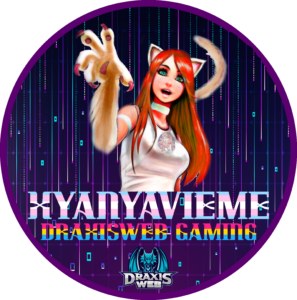 How to Host a Game Party at Your Home

What to Do When You’re Stuck in a Video Game

Games to Check Out if You Like to Play Online

Innovations That Are Changing Gaming Today

How to Change Your Diet to Feel Better About Yourself